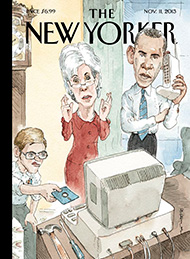 I used to read the New Yorker - but then gave up. Each magazine was mostly left unread (and even unskimmed) and I had tall stack of piled up magazines in the corner. Guilt rose commensurately with size of the stack.

Then a month ago I decided to give it another try - on a tablet. I ordered the paper copy of the magazine. That gives me access to their tablet version - which is actually a much better interface. Each feature is presented as one long page that you scroll up and down. And you flick left-right to move between features. So if I start reading a piece that I find boring (which is probably 50-60% of the magazine), it takes one flick of a finger to move to the next one - genius!

This is the best implementation of a long-form magazine that I've seen. My only nitpick is not being able to set a constant font size. Each feature (ie article) starts off with a small font that you can somewhat increase (but still only roughly up to 12px). I would rather be able to change this once.
Collapse